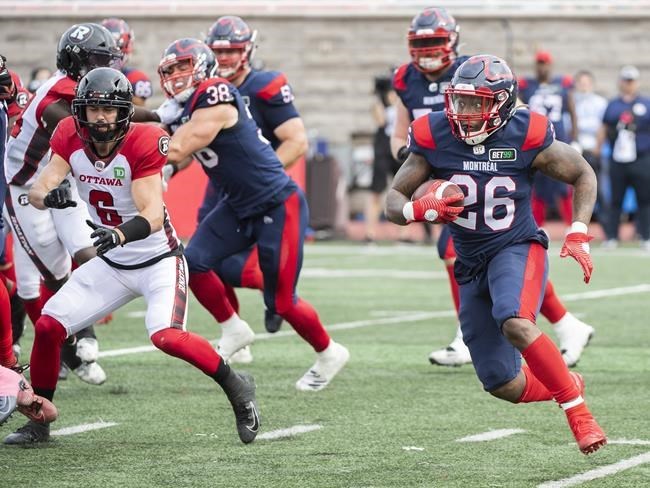 MONTREAL — With the game on the line on the final drive, Montreal Alouettes coach Khari Jones had to call upon backup quarterback Matt Shiltz to win their first home game of the season.

Stepping in for injured Vernon Adams Jr., who left Percival Molson Stadium on a stretcher on Monday, Shiltz led the game-winning drive with 42 seconds left to play.

Running back Cameron Artis-Payne ran in the late touchdown that lifted the Alouettes to a 20-16 victory over the Ottawa Redblacks, Montreal’s first home win of the season.

Filling in for CFL rushing leader William Stanback, Artis-Payne ran for 122 yards in his first start for the Alouettes (4-4). The former NFL player kept his composure on the final drive.

“I was excited but there were no nerves,” Artis-Payne said. “We had Schiltz in, I knew he was going to make the right decisions.”

“We knew what we had with Cameron, we really did,” Jones said. “I didn’t change the game plan, it was the same as I normally do and he rewarded us by doing what he does.”

Adams Jr. suffered a left shoulder injury that ended his game. While Jones said he wouldn’t speculate on the severity of the injury, he said his condition was “discomfort” and that the quarterback was taken by medical crew to ease the pain.

Shiltz spoke highly of his teammate and wished him a speedy recovery.

Ottawa quarterback Caleb Evans failed to throw a touchdown pass, racking up 125 passing yards and one interception. Lewis Ward was the only Redblack (2-7) to score, kicking four field goals.

The Als entered the game with a bang. Almondo Sewell and Davis recorded two sacks on the two first plays of the game and forced a three-and-out. Montreal followed with their first touchdown, a five-yard pass from Adams Jr. to Jake Weinieke for his league-leading seventh touchdown.

Following a difficult first quarter that saw Evans sacked three times, the Redblacks responded with a field goal from Ward in the first play of the second quarter.

Ottawa added two more points by keeping the Montreal offence in their own zone, forcing punter Joseph Zema to concede a safety and slicing the Als’ lead to 7-5.

With 57 seconds to go in the first half, Ward booted his 20th field goal of the season, to give the Redblacks an 8-7 lead heading into the break.

Before their final game-winning drive, Montreal conceded another safety with 3:33 to go in the game following two consecutive sacks by Ottawa, their fifth and sixth of the game respectively.

Shiltz completed all three of his pass attempts in the drive for 36 yards, and said Montreal was intent on going for the win rather than settle for a field goal and tie.

“He was Matt,” Jones said. “He’s calm, he doesn’t let the situation bother him and it’s great for me because I don’t have to change what I’m doing. I had the utmost confidence in him too. He doesn’t let the moment get too great for him. It’s nice to have a guy who’s been around the league and that had opportunities and it just felt really comfortable calling the game for him.”

Shiltz wouldn’t speculate about who his starting quarterback will be on Saturday, when the two teams meet again, but he said he’s ready to step up again if needed.

“If it is something serious and if I’m named the starter I will just go out there and do my job and I’ll do whatever I can to help the team win,” Shiltz said. “I hope that Vernon is OK. It’s just one day at a time and I’ll be ready if my number is called upon.”

This report by The Canadian Press was first published Oct. 11, 2021.