Back in fall 2019, as Dave Koz was readying himself to do his annual holiday tour, he was already having thoughts about making an ambitious new album.

“In the beginning the idea was to make like a double album or maybe a double EP that would reflect a little bit about where I’d been and then where I’d like to go,” Mr. Koz recalled in an early November phone interview. “I remember even, ‘Yesterday and Today’ was the working title of that.”

Of course, within a few months, the pandemic hit and this turned everything upside down, including Mr. Koz’s plans for a double album. Like many people, the popular saxophonist struggled to find his bearings in this strange new world of closed businesses and quarantining.

But Mr. Koz, who has always been one of the busier artists in music — hosting two weekly radio shows, organizing cruises, partnering in a wine business, recording albums and doing at least a pair of tours most every year — didn’t let the unexpected free time keep him from being productive. 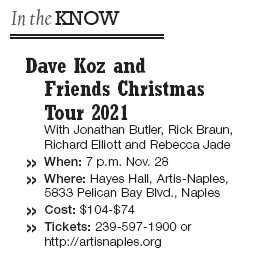 As a result, Mr. Koz has not one, but two, new albums under his belt as he embarks on the 24th edition of his Dave Koz and Friends Christmas tour, which stops at Artis-Naples on Nov. 28.

The first of those albums, “A New Day,” arrived in October 2020, and it’s Mr. Koz’s first album of original non-holiday music in a decade. To an extent, it follows through on the idea of making an album that stays true to the musical style of the 10 non-holiday studio albums Mr. Koz has released since 1990 (all of which have gone at least top 5 on the contemporary jazz chart). Like his previous albums, “A New Day” is largely in the instrumental R&B-accented smooth jazz realm.

The pandemic, though, did influence the upbeat feel of the music and how “A New Day” was made.

“Immediately kind of when the pandemic hit, this is March of 2020, after the initial shock wore off, I was like, well, this is what I noticed about myself. I was really fumbling toward, trying to make myself feel better,” Mr. Koz said. “And I noticed it was really through music that I was able to accomplish that, my feel-good music from people I could count on. So it kind of dawned on me that maybe I should get my ass into gear and record some music hopefully to do the same thing for other people.”

Of course, the next question was how would Mr. Koz be able to work with his songwriting collaborators and the musicians who would record the material when they couldn’t get together in person? To his surprise, Mr. Koz found working virtually using the internet was a viable way to get things done, and he was able to collaborate with several long-time musical friends, including Rick Braun, David Sanborn, Jeff Lorber and Bob James.

“It (the album) was amazingly easy to make because everybody was home (and available),” Mr. Koz said. “Everybody was like really excited about making any kind of music. I would call drummers and bassists, people like Nathan East or Paul Jackson Jr. or Jeff Lorber, I’d call them up and they’d say ‘Could you send it (some music) over today?’

“I would have loved to have gotten together with people and written in person,” he said. “But in this situation, it had to be what it had to be. So these guys would send me fragments of songs, maybe like a verse, chorus, saying what do you think of this? Either I would hear something immediately or not. A lot of it, it kind of inspired me to be a little bit more in the moment in writing songs.”

The more spontaneous approach to songwriting was partly an outgrowth of the second of Mr. Koz’s two current albums, “The Golden Hour.”

In February 2020, Mr. Koz had gotten together with producer/co-writer Cory Wong to compose songs for that album. “The Golden Hour” would be a quite different venture for Mr. Koz, pairing him and guitarist Mr. Wong with a big band playing, in many cases, songs that were more energetic — at times even rocking — than Mr. Koz’s other albums.

“He inspired me,” Mr. Koz said of Wong. “He said to me, ‘I just want you to do one thing, and that’s one thing for me, and that is not second-guess yourself. Let’s just go with it. Don’t try to overthink about stuff. Let’s just capture these songs in the moment and then we can come back to them and see whether we like them. At least in the writing phase, don’t judge.’ That was really great advice because I’m a total judger while it’s going down. So I think a little bit of that rubbed off in the songwriting for ‘A New Day,’ where I was just able to just say ‘OK, I like this today and let’s finish it and see if it makes it tomorrow.’”

The partnership with Mr. Wong came about in a unique way. Mr. Wong, who has been making waves by bringing jazz and instrumental music to a younger audience, wanted to meet Mr. Koz and explore a collaboration. He devised a plan in which he invited fans at his concerts to record on their phones a short smooth jazz instrumental bit he played with his band, post the videos online and send messages to Mr. Koz.

This certainly got Mr. Koz’s attention.

“I was like, ‘Who is Cory Wong and why are all of these people accosting me online about him?” Mr. Koz recalled. “It was kind of funny because I thought it was done with a lot of tongue in cheek and a lot of humor and very much his sense of humor, by the way, because he’s all about having fun and pushing it a little bit, and the inappropriateness of it all. Then I did like the deep dive. I was like ‘OK, who is this person? What’s he all about?’ And the more I found out about his music and what he does, the more I was kind of like, this is absolutely somebody I would like to get to know.”

The two quickly clicked and decided to do “The Golden Hour” project. The songs were ready before the pandemic hit, but the shutdown put plans to record live in the studio on hold for a time.

“Originally, we were going to record it in June of 2020. That didn’t happen. Then July came and went, and August,” Mr. Koz said. “Finally, in September, we all just said ‘We’re doing this.’ Come hell or high water, we’re going to don our masks, and we all went into the studio, 10 of us musicians, a camera crew and audio crew, which was probably somewhere around 18 or 20 people, all masked up, all very cautious. And somehow over three days, we were able to record that album, and that came out in June of this year.”

Fans, though, shouldn’t expect to hear much material from either “A New Day” or “The Golden Hour” on the Christmas tour, which features Mr. Koz joined by four musicians he considers to be like family — Jonathan Butler (bass, vocals), Rick Braun (trumpet), Richard Elliot (sax) and Rebecca Jade (vocals).

“This year we’re really focusing a lot more on Christmas music because I think it seems to be what we really want to play and I think what probably most people want to hear,” Koz said. “It’s just that old-fashioned nostalgia, that stuff that as soon as you hear it makes you feel all warm and fuzzy.” ¦